The Company holds pre-production and production royalties on two gold projects in Finland owned by Aurion Resources Ltd. As set out below.

Located approximately 20 km to the east of Kiekerömaa Project, the 315 ha Kaaresselkä project comprises multiple shear zone hosted gold zones that are up to 16 m wide and 650 m long, adjacent to the Sirkka Shear Zone, a major regional deformation zone, that is host to more than 45 gold prospects. Multiple high-grade drill intercepts including 11.0 g/t Au over 4.9 m, 13.5 g/t Au over 2.75 m, and 45.0 g/t Au over 2.0 m have been reported.

Mineralisation there was initially discovered by the geological survey of Finland (GTK) who subsequently carried out extensive geochemical and geophysical surveying, trenching and diamond drilling. Tertiary acquired the project by staking in 2003 and subsequently completed limited geochemical and geophysical surveys followed by drilling.  A total of 127 historic drill holes were completed by GTK and Tertiary.

The Project was sold to Aurion Resources Ltd in 2016. Although no drilling was conducted in the period 2016-2020, Aurion’s work on the project has included re-logging of all drill holes, oriented core measurements, a detailed ground magnetic survey, whole rock geochemistry, GIS compilation and integration of historical data into 3D modelling software. This compilation work has allowed for a reinterpretation of the geology and a better understanding of the property’s potential.

Aurion commenced a drilling programme in September 2020 to confirm previous drill results and to test for additional mineralisation along strike and down dip of known mineralisation.

The main host lithology is strongly altered and sheared mafic volcanics, which is a classic setting for major orogenic gold deposits.

Three individual zones, Vanha, Tienvarsi and Lampi, are found in a 1 km x 0.6 km area. Historical drilling was shallow with gaps along the strike of the zones. Aurion’s additional analysis suggests there is excellent potential along strike and down dip of these gold-bearing structures.

At Vanha, a 500 m long east-west trending mineralized zone was drilled to a depth of 140 m and appears to be open in both directions along strike and at depth.

At Tienvarsi, drilling identified a 400 m long northwest to southeast trending mineralized zone to a depth of 96 m. Mineralization at Tienvarsi appears to be open in all directions.

At Lampi, drilling identified two proximal 200 m long mineralized zones to only 100 m depth. Mineralization at Lampi appears to be open in all directions.

Aurion has discovered bonanza grade gold mineralisation at its 100% owned Risti project. The Kaaresselkä project is located in the same regional deformation zone to the south of Risti.

Located in the Lapland Greenstone Belt in Northern Finland, the 840 ha Kiekerömaa project hosts gold mineralization over a strike length of 300 m.  The prospect was discovered by the state mining company Outukumpu Oy in the late 1990s while exploring for base metals.  Tertiary acquired the prospect in 2003 by staking and completed a small drill program in 2011.  Historic drill intercepts from limited drilling by Otukumpu and Tertiary include 5.8 g/t Au over 5.0 m, 7.4 g/t Au over 2.0 m and 3.6 g/t Au over 4.6 m.  The mineralization remains open in all directions. 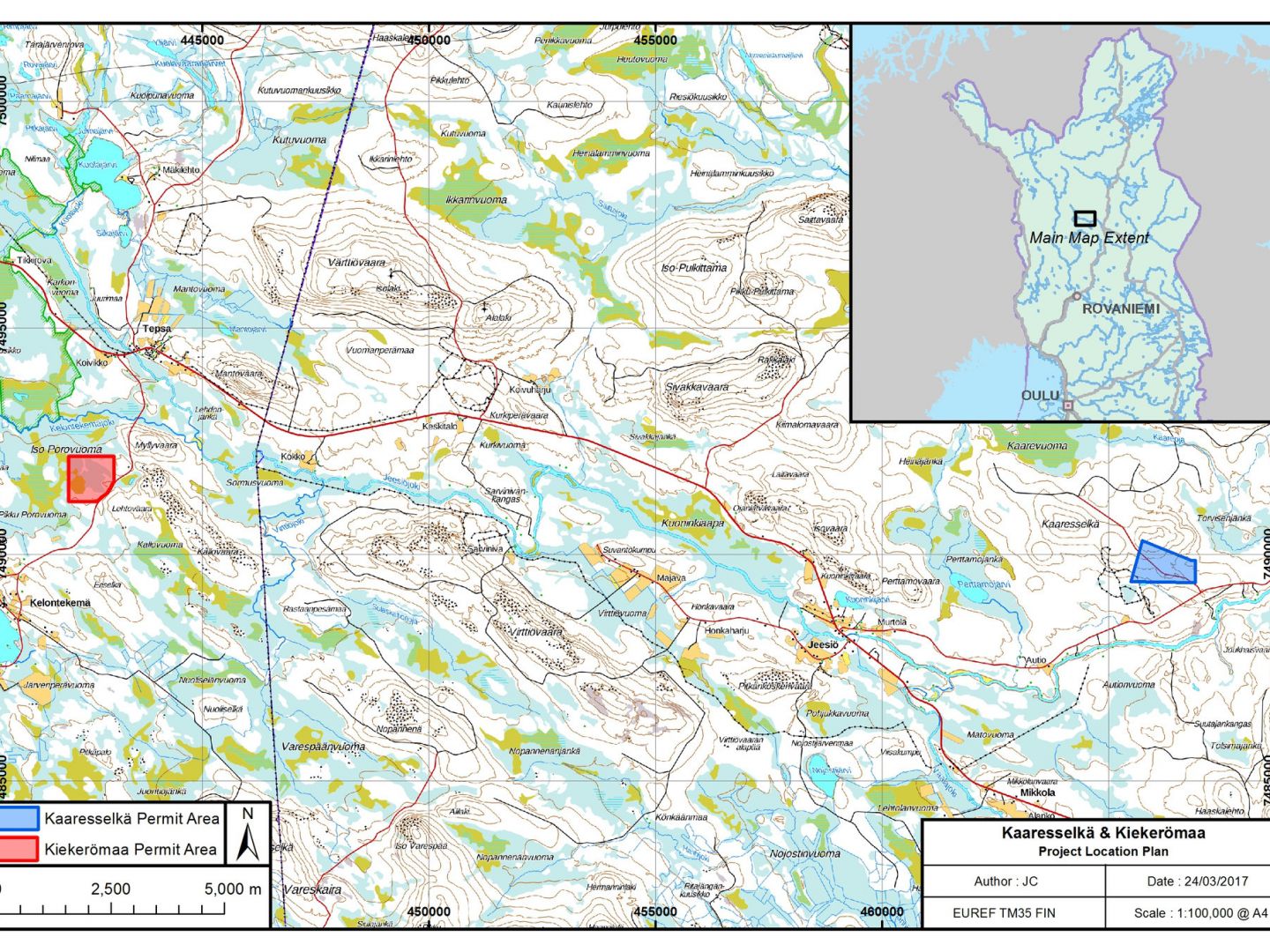 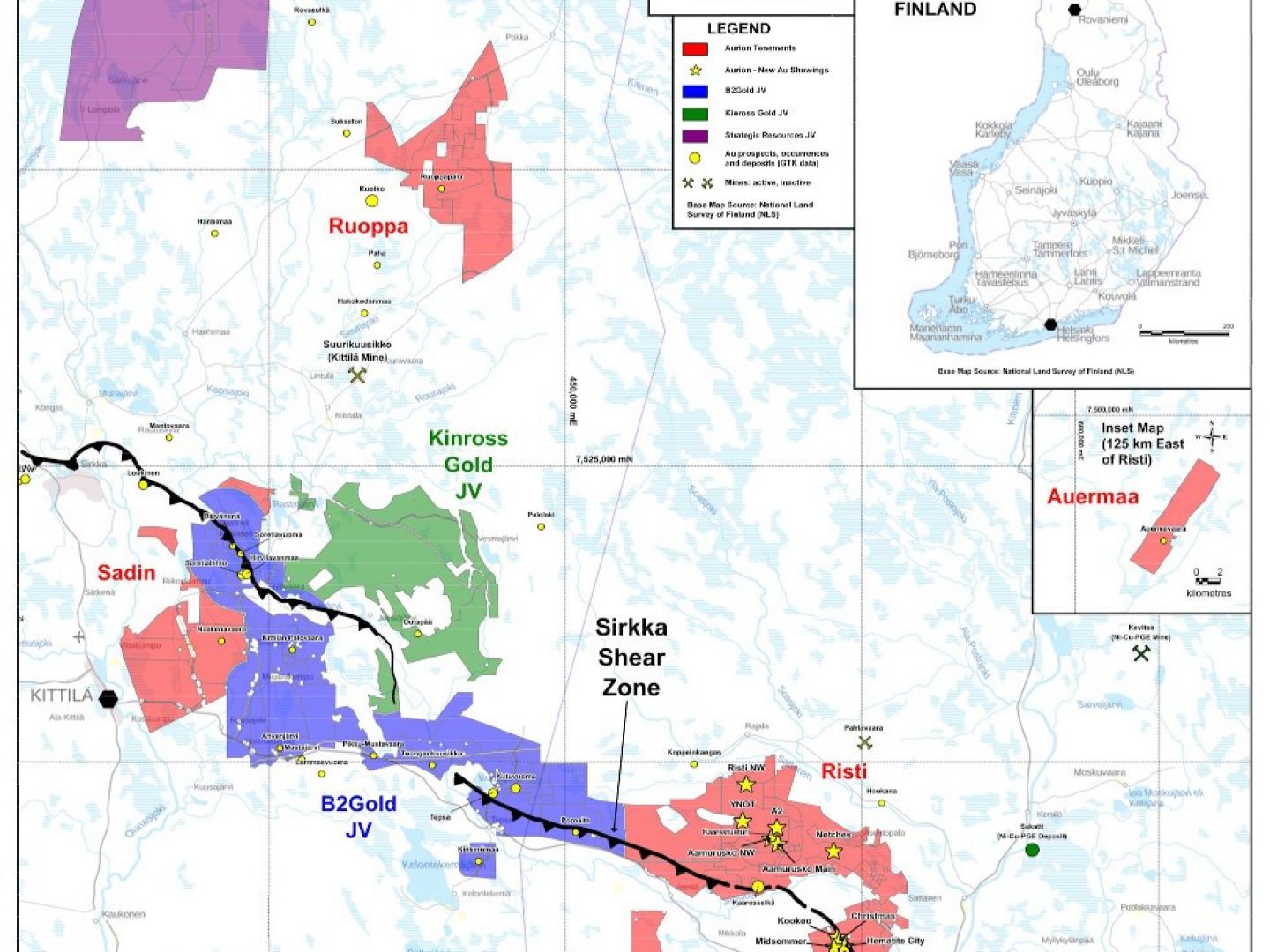