The Company secured exploration rights and an option to purchase a group of claims in the Pyramid Mining District of Nevada in May 2019.

The project is located 25 miles northwest of Reno and is readily accessible from State Highway 445 which crosses the northwest tip of the project.

Within the Pyramid Mining District, the Company’s Pyramid Project is underlain by a thick sequence of mid-late Tertiary age (23 Ma old) rhyolitic tuffs interpreted by the Nevada Bureau of Mines & Geology to have formed within an east-west elongated Caldera structure named the Perry Canyon Caldera.

The gold veins at Pyramid lie within the Perry Canyon Caldera and are interpreted from historical mapping and mineral exploration to lie on the margins of a large and deeply buried porphyry system in the southeast part of the district that is currently claimed by copper producer Asarco LLC (a division part of Groupo Mexico). At the higher erosional levels currently preserved  at Pyramid such porphyry systems are prospective for high-sulphidation gold deposits (in more central areas) such as those found further south in the Walker Lane at the Goldfield Mining District (4 million ounces of past production at 1oz gold/ton) and  low and intermediate-sulphidation epithermal deposits (of which there are many examples in the Walker Lane) in more peripheral areas where the Company’s claims are located. This pattern of mineralisation is similar to that of many large porphyry systems in the US, Peru and the Pacific basin countries.

In the main part of the Pyramid District precious metals were mined from three moderately to steeply dipping, northwest-striking vein systems named after the prominent mines that occur along them - Ruth, Burrus, and Bluebird. The Company’s claim interests cover the Ruth vein system and a number of parallel vein systems and zones of alteration.  In addition to abundant quartz and pyrite, vein minerals in unoxidized ore from the Ruth vein system include barite, anglesite, galena, sphalerite, acanthite, gold, and cassiterite.

The Pyramid Mining District was established in 1866 with only small-scale production reported. Modern exploration in the Pyramid district has focussed primarily on the search for porphyry copper mineralisation with only limited exploration having been carried out for gold.

The only documented field exploration in the area of the Company’s claims was carried out by Battle Mountain Gold Mining (“Battle Mountain”) who leased the project from the current lessors, Golden Crescent Corporation, in the period 1988-89. Battle Mountain carried out surface sampling, soil sampling and drilled 10 shallow exploration holes for a total of 1,006m of drilling to depths between 43 and 140m.

Soil sampling was conducted on a 30 x 120m grid within a confined area 600m x 600m centred on Battle Mountain’s main target area, the Ruth Mine vein system and associated vein stockwork. This identified a series of gold-in-soil anomalies and eight of their ten drill holes were designed to test a broad gold anomaly located just northwest of the Ruth Mine. These intersected areas of anomalous gold up to 1.5m grading 1.64 grammes/tonne gold (g/t Au) in hole PYR 1 from 10.7m depth.

Battle Mountain’s two other drill holes were designed to test a parallel vein west of the Ruth vein system which correlates with a separate strong gold-arsenic-mercury soil anomaly, mercury and arsenic being strongly associated with gold in epithermal gold deposits. This soil anomaly is open ended and continues strongly to the northwest southeast boundaries of the sampled area.

Drill hole PYR 9 on this western line intersected high-grade gold mineralisation and visible gold within a sample thickness of 1.52m grading 17.8 g/t Au from 94.5m downhole. A broad zone of low-grade mineralisation continued to the end of the hole at 115.8m where the last 1.52m sample graded 2.6 g/t Au.

PYR 10, targeted the same western line soil anomaly some 150m to the southwest but was interpreted to have been drilled in the wrong direction and made no significant gold intersections.

Battle Mountain did not carry out any follow up exploration.

In 2020 the Company completed drill hole TPYR1 to twin and deepen percussion hole PYR9. TPYR1 was drilled to a depth of 137m down hole at the same 45-degree angle and azimuth and from the same general location as PYR9. Gold assay results showed a best intersection of 0.55m grading 2.01g/t Au from 82.6m down hole. Whilst lower than those from the historic drill hole PYR9, the results have confirmed that the target zone is gold mineralised.

A soil sampling programme was subsequently carried out to confirm and determine the extent of an open-ended gold and multi-element soil anomaly originally defined in the 1980s by Battle Mountain Gold Mining Company. 370 soil samples were collected at spacings of 30m on 120m spaced lines on a grid oriented SE-NW along the main vein trend. In the south end of the property soil sample lines were more reconnaissance in nature with a line spacing of 360m.

The historic soil anomaly over the “Western Line” was confirmed over a strike length of 1000m with values up to 349ppb gold (0.35 g/t Au) and 22 ppm silver. Wider spaced sample lines to the southeast suggesting a possible 750m extension to the Western Line Anomaly where infill sampling is now required.

In addition, the survey identified two new, untested soil anomalies, anomalous for both gold and silver. The first of these appears to be a splay off Western Line (the Western Splay Anomaly) and has a length of 550m open to the south (maximum values of 177 ppb gold and 3 ppm silver). The second is an 800m-long anomaly located to the northeast of the Western Line Anomaly and follows a northern projection of the Ruth Mine vein system (the “North Ruth Anomaly”).

The North Ruth Anomaly contains soil values up to 1.63g/t gold and 207g/t silver (6.04 ounces/ton). These potentially “ore-grade” values require immediate follow up and so trenching is now planned to expose the bedrock for sampling to determine their significance as future drill targets. 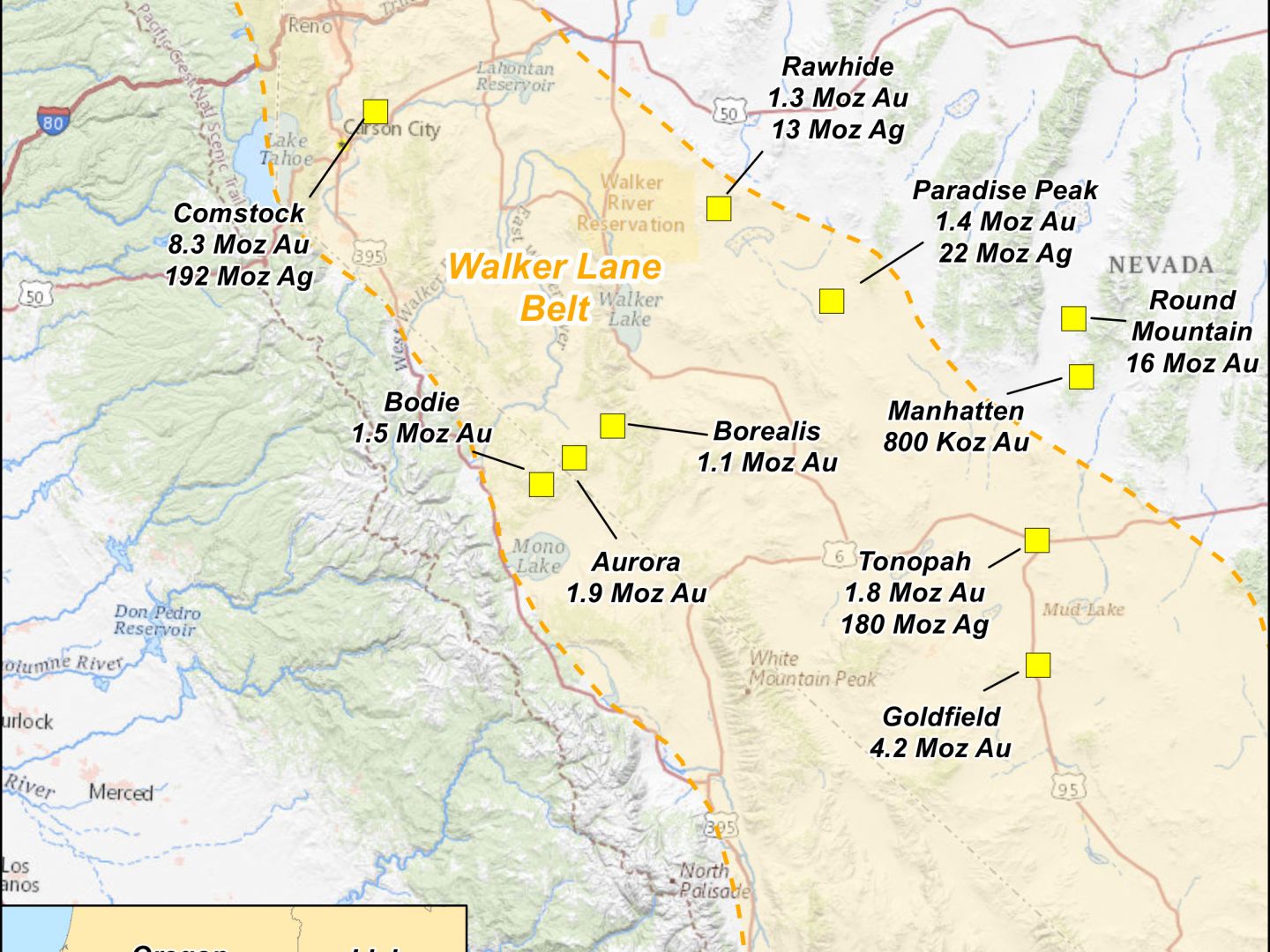 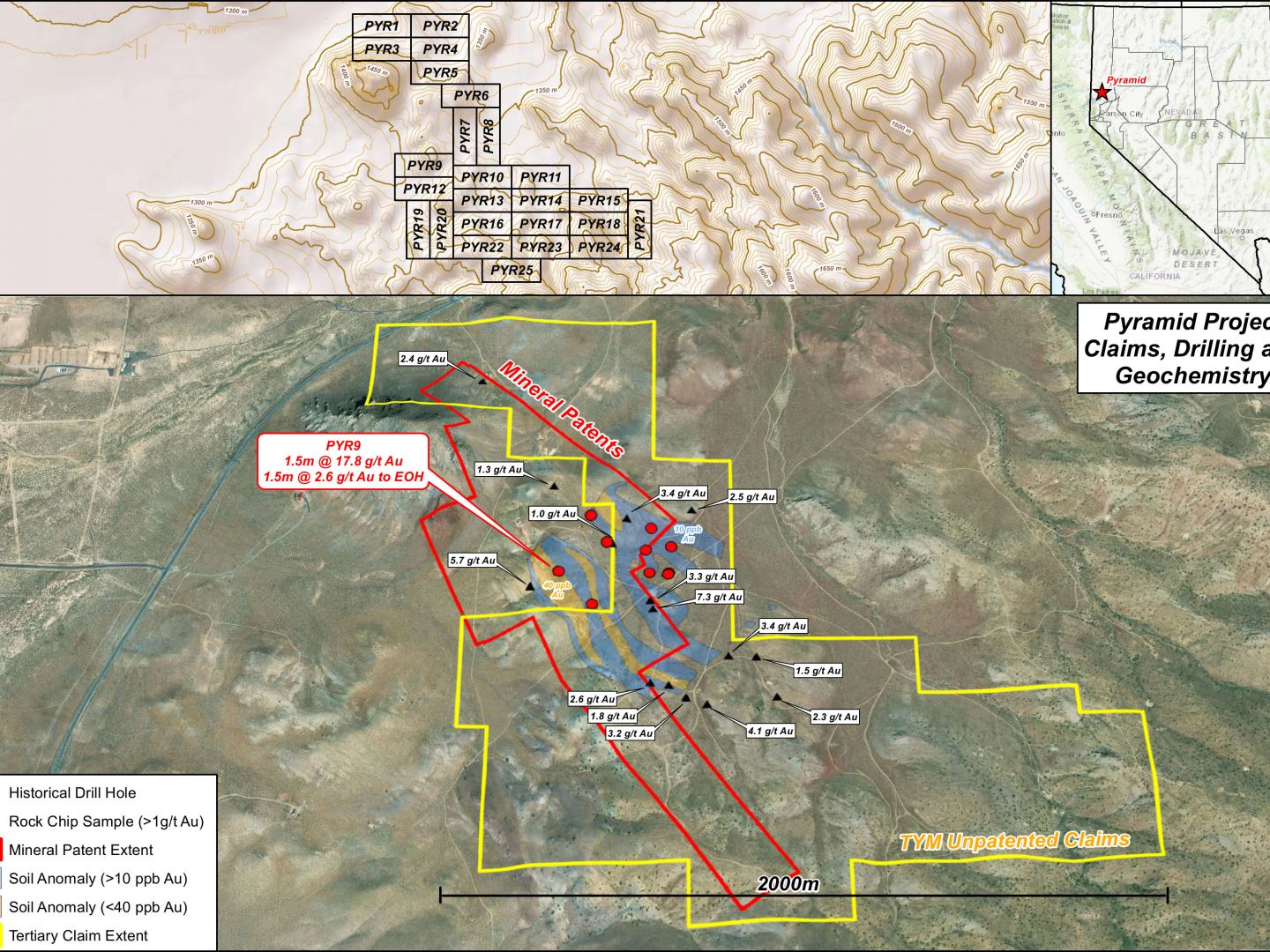 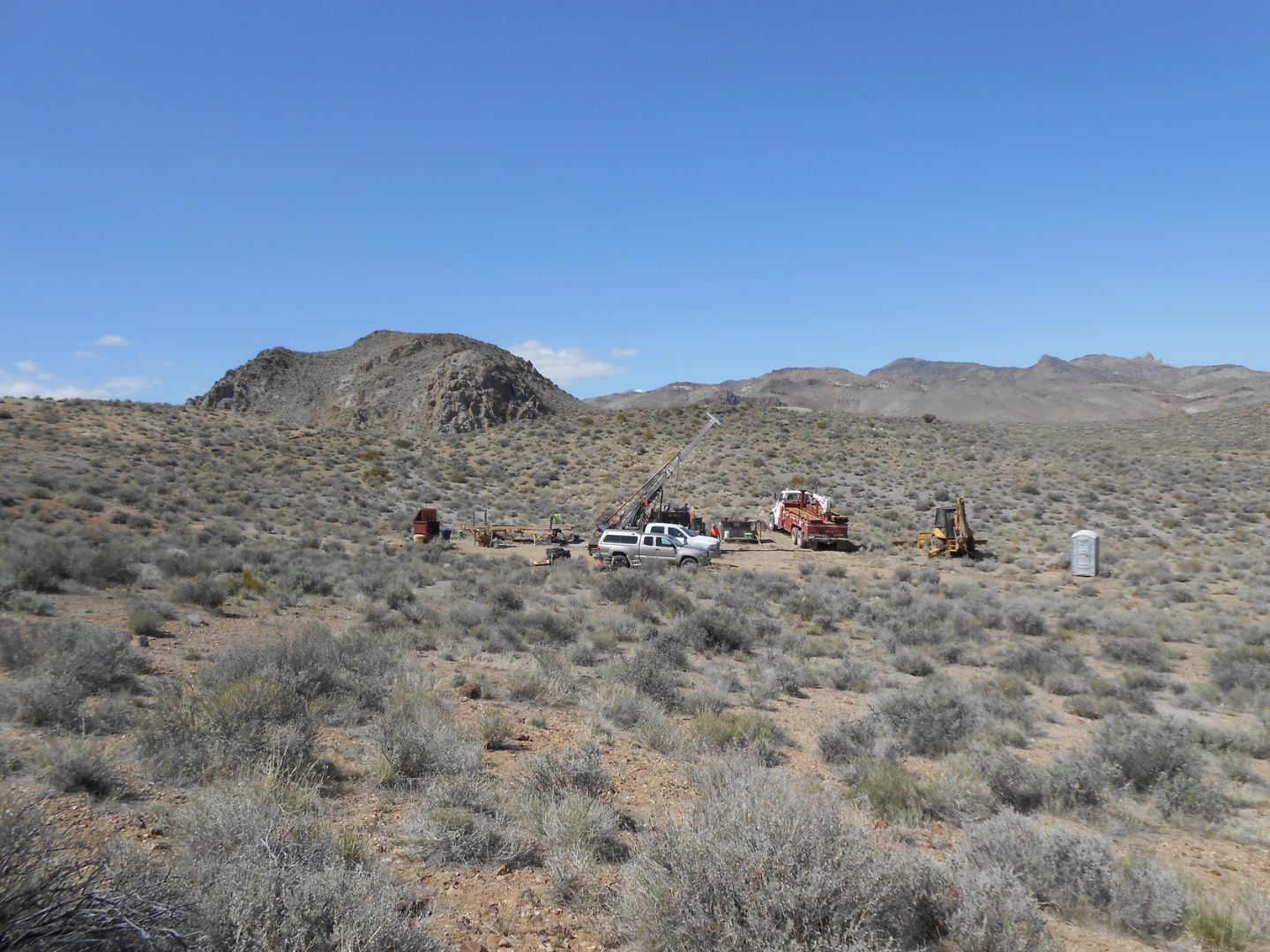 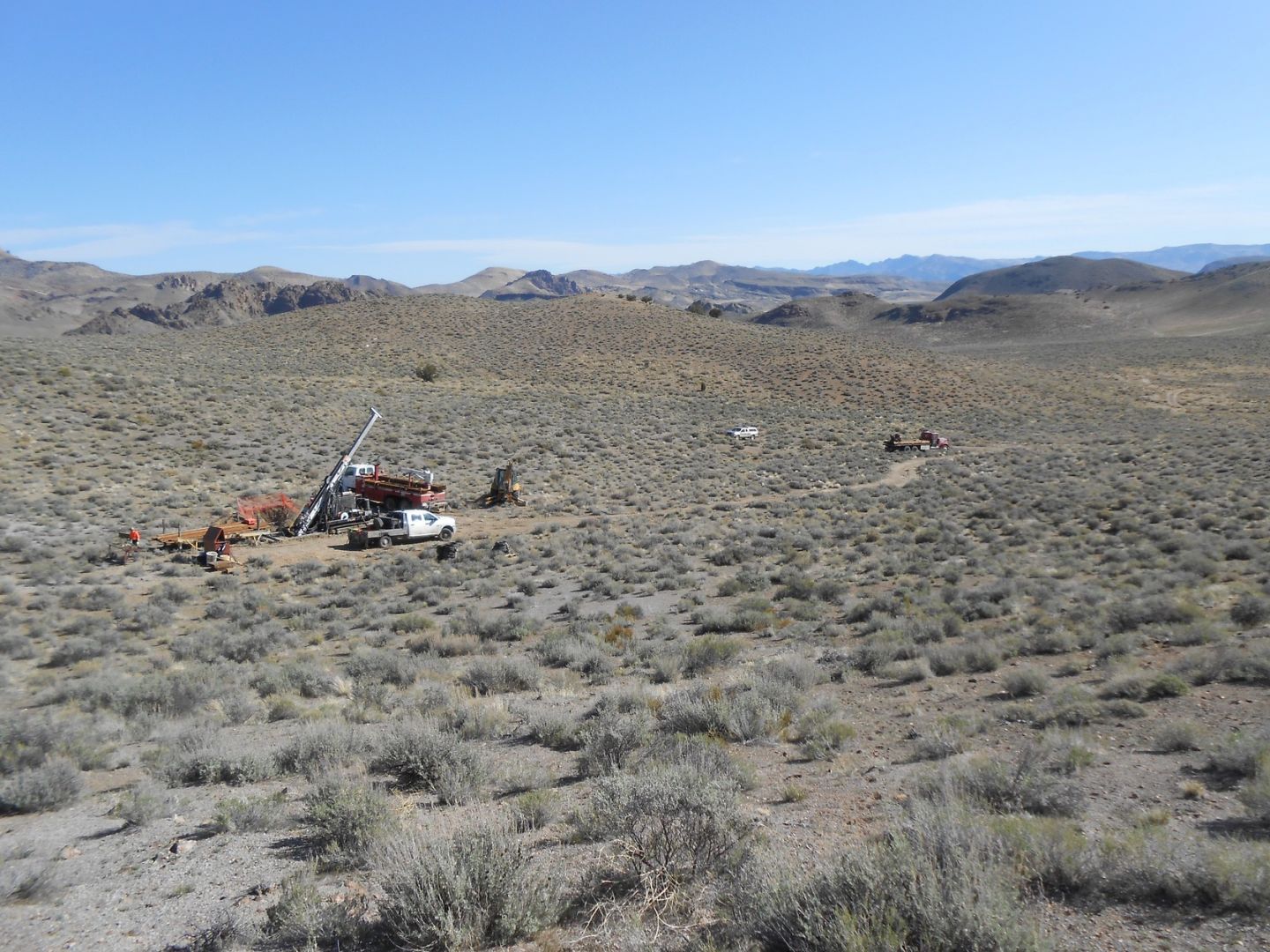 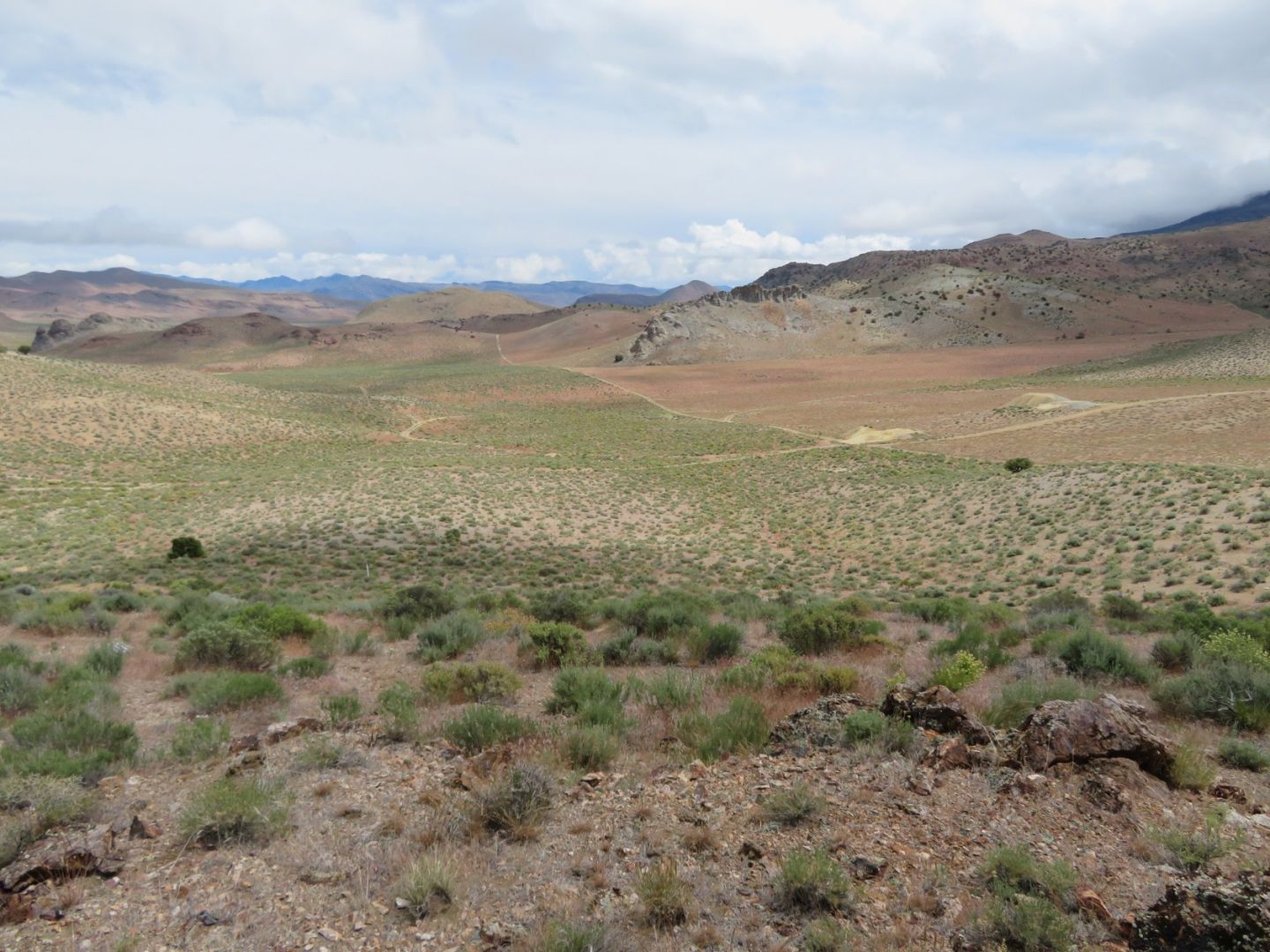 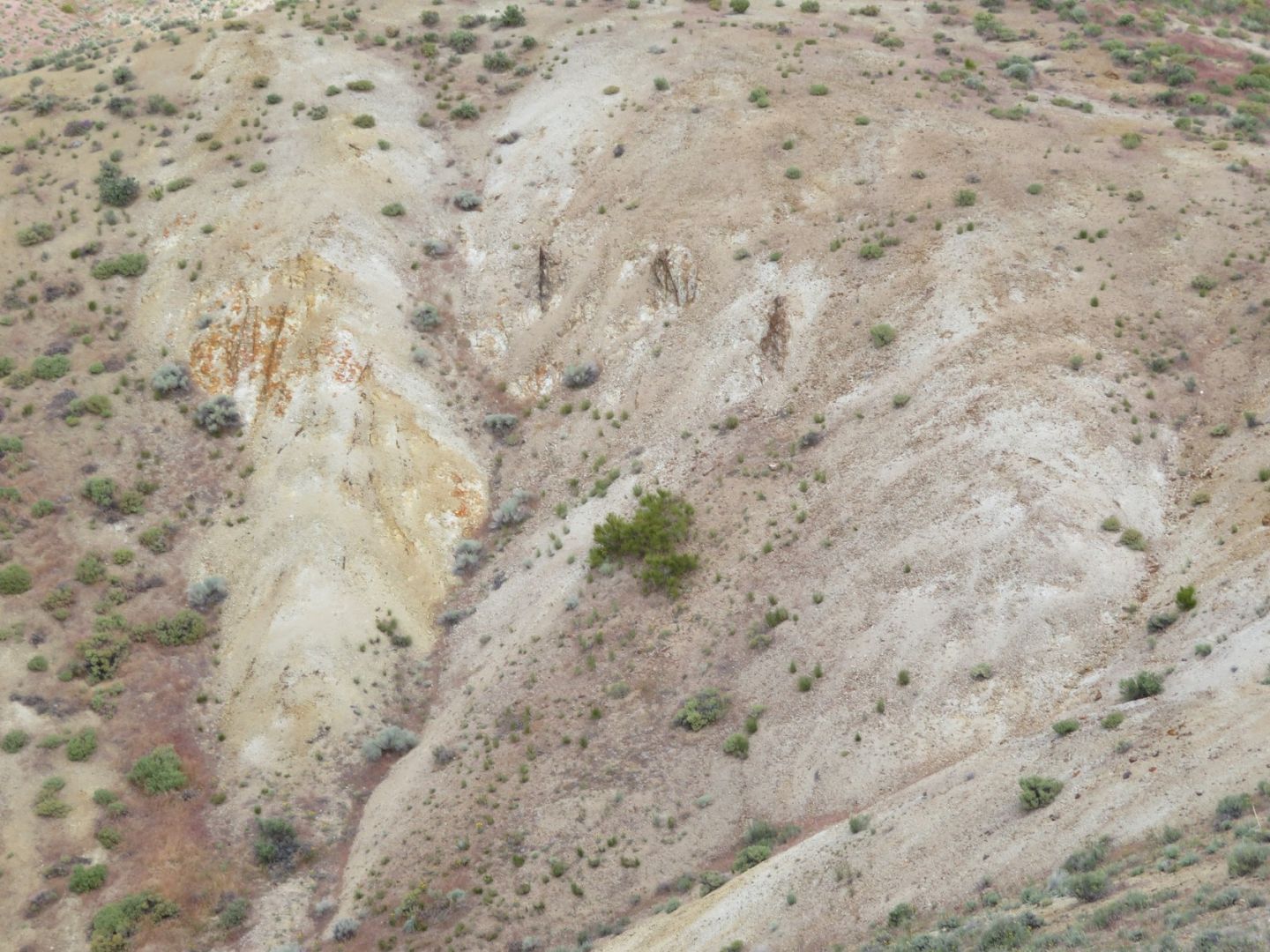 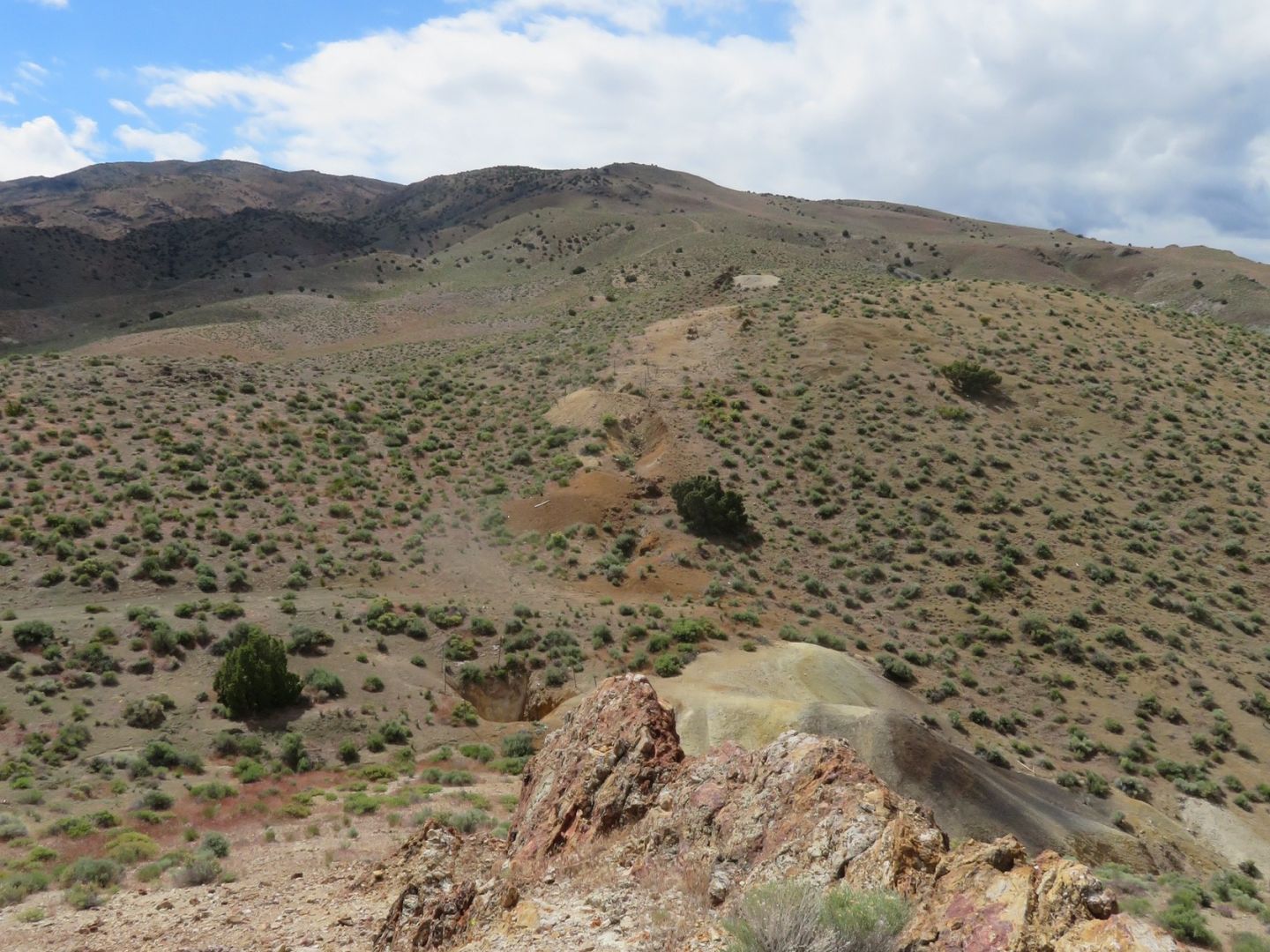 View Looking South Along Lines of Workings Tested by PYR 9