The Company’s 100% owned Storuman Project is located in north central Sweden and is linked by the E12 highway to the port city of Mo-i-Rana in Norway and by road and rail to the port of Umeå on the Gulf of Bothnia. A bulk rail terminal, constructed in 2012, 25km from the project site is likely to become an important factor in the cost-effective delivery of fluorspar to the key European fluorspar market.

A conventional open pit strip mining operation of 1.0 million tonnes per annum (Mtpa) is envisaged for the Project, with a life of mine exceeding 20 years. Waste rock material generated from the stripping operations will be used to construct the tailings storage facility and excess waste material will be directly backfilled into the open pit during operations, effectively progressing pit closure during mining operations.

The primary mining operations will consist of drilling, blasting, loading and hauling of ore and waste materials with free digging envisaged for the glacial till and shale overburden. Mining is envisaged to be undertaken by a mining contractor to reduce pre-production capital expenditure.

Based on a preliminary Whittle pit optimisation carried out by SRK in March 2011, a total mineable tonnage of 27.8 Mt grading 10.2% CaF2 and producing 2.3 Mt of concentrate can be economically extracted using the Scoping Study metallurgical recovery of 81.9%. The average stripping ratio is 0.8 for the life of mine which equates to 22.2 Mt of waste produced.

A 1.0 Mtpa flotation process plant is envisaged for the Project with three stages of crushing, primary ball mill and two regrind stages. Ore will be delivered to a run of mine (ROM) pad and fed to the plant via a front end loader. The final concentrate product will be transported to a Swedish port for export.

Metallurgical testwork conducted by SGS Minerals Services (Canada) during 2008-2010 was directed and reviewed by Malcolm Crawford of Delta Minerals Limited, a recognised fluorspar processing specialist based in England. This testwork formed the basis of the conceptual process flowsheet used in the Scoping Study and shown below.

The Storuman project is a large fluorspar deposit containing 2.3 million tonnes of recoverable, open-pit mineable, fluorspar. With a conceptual Acid-spar output of 100,000 tonnes per year Storuman would be a medium-scale producer. The relative proximity of Storuman to Europe and North America is seen as an advantage, and local deep-water ports will allow product to be delivered to any international market assuming price and suitability is acceptable. It is also anticipated that Sweden’s low political risk; excellent regional infrastructure; and long history of mining may offer strategic advantages over some traditional sources. A newly constructed bulk rail terminal 250km from the project site is likely to become an important factory in the cost-effective delivery of fluorspar to the key fluorspar markets.

The completion of the Scoping Study on the Storuman Fluorspar Project by Scott Wilson Limited is an important milestone in the evaluation of this project and provides the Board of Tertiary Minerals with an important document for decision making on the merits of further investment in the Project.

Scott-Wilson further comments that the Scoping Study and its economic analysis (which included cost accuracies are in the region +/- 35% based on 2nd quarter 2010 estimates):

As such Scott Wilson caution that, although in their opinion the available geological information at this stage of the project does not fully reflect the potential of the Storuman fluorite deposit, there is no certainty that the economic forecast will be realised.

The Mineral Resource Estimate is based on the results from 56 diamond drill holes completed by the Company in 2008 and 2010. All tonnage in the estimate falls within a Whittle optimised open-pit with low waste overburden strip ratio (0.8 tonnes of overburden per tonne of mineralisation).

By definition, a JORC compliant Mineral Resource must have reasonable prospects for eventual economic extraction and portions of a mineral deposit that do not have such prospects must be excluded from the estimate.

To determine the Mineral Resource Statement, a Whittle pit optimisation exercise is used to determine the proportion of the material that has a reasonable prospect of economic extraction. The ore tonnage and grade generated by the pit optimisation process is the Mineral Resource Estimate. It is classified as either “Inferred” or “Indicated”. The Minerals Resource at Storuman is 90% in the higher “Indicated Mineral Resource” category which means that confidence in the estimate is sufficient to allow the application of technical and economic parameters, and to enable an evaluation of economic viability.

In response to the stakeholder feedback the Swedish Mining Inspectorate requested further detail from the Company in relation to the impact of proposed operations on the Natura 2000 and reindeer herding within the wider surrounding area and were granted a deadline of 16 April 2018 to respond.

Given that the level of detail required for the wider area has changed in response to the new case law, the Company engaged, through a series of meetings, with its Swedish consultants, lawyers, the Swedish Mining Inspectorate and The County Administrative Board of Västerbotten (“CAB”) in an effort to establish the requirements prior to the work being executed and submitted. Despite the Company continuing to have a good relationship with the CAB and has fully engaged with its key staff members throughout this process, without which the original Mine Permit would not have been awarded in the first place, the CAB seems unable to provide definitive guidance or opinion regarding the additional information or requirements.

Subsequently, comprehensive supplementary reports by the Company’s consultants and a legal statement were prepared and submitted to the Swedish Mining Inspectorate in April 2018, consisting of:

The reports concluded that the Company’s proposed mining operations at Storuman, with mitigation measures proposed, will have only a minimal impact on reindeer husbandry and that there will be no impact on the Natura 2000 area.

The CAB has therefore advised against grant of the Mine Permit in its current form.

The Company, together with its Swedish consultants and lawyers, strongly disagree with the CAB’s assessment that reindeer herding and the TSF cannot co-exist and maintain the conclusion of the in-depth analysis of reindeer herding that the Company’s proposed mining operations at Storuman, with mitigation measures proposed, will have only a minimal impact on reindeer husbandry. The Company therefore prepared a comprehensive legal statement and submitted this to the Mining Inspectorate, summary as follows:

In January 2019 the Company received the following opinion from the Swedish Mining Inspectorate:

The Company’s Swedish lawyer has commented that the Mining Inspectorate has not fully assessed the case regarding the protective/mitigation measures suggested by Tertiary and has instead only taken the CAB’s assessment into account.

Any ratification of the grant of the mining concession will, however, be open to appeal and the Company will therefore not spend any further money on exploration or development of the Storuman Fluorspar Project until the matter is resolved.

Whilst the key chemical specifications have been met and improvements have been made to the processing flow sheet, the test work is producing a fluorspar concentrate which is still finer than the ‘typical’ market specification. It is critical at this stage that the Company engages with key end users to discuss their technical requirements and the suitability of the Storuman fluorspar concentrate. The Company has therefore completed a programme of constructive discussions and plant visits with various end users. Based on the discussions and advice provided by the end users the Company, together with its specialist mineral processing consultancy, will need to complete a detailed work programme with the following objectives:

Before progressing onto the outstanding phases of the Preliminary Feasibility Study it is critical that each phase of the detailed testwork programme is successful. All PFS work is currently on hold until the Exploitation (Mine) Permit matter is fully resolved. 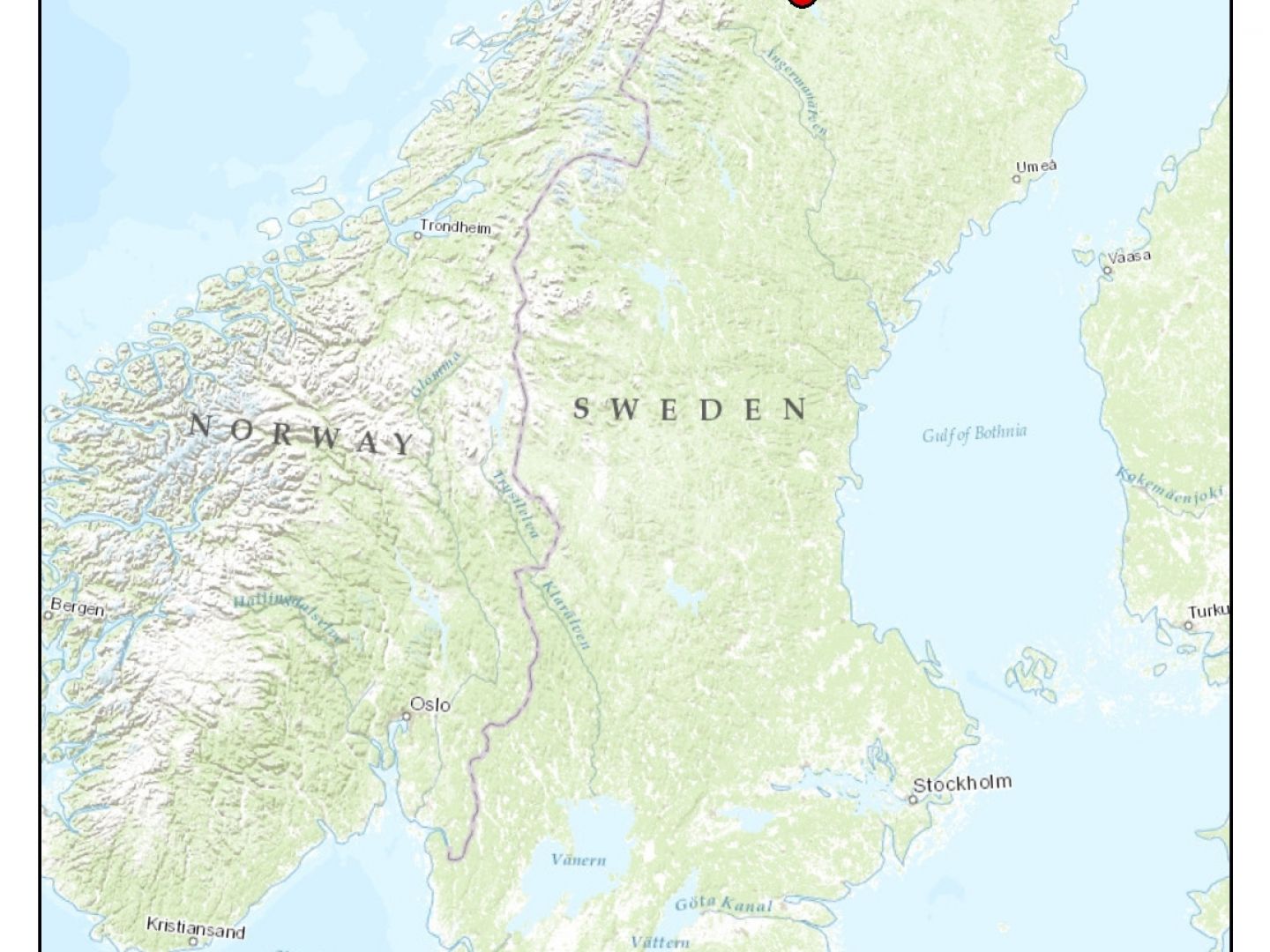 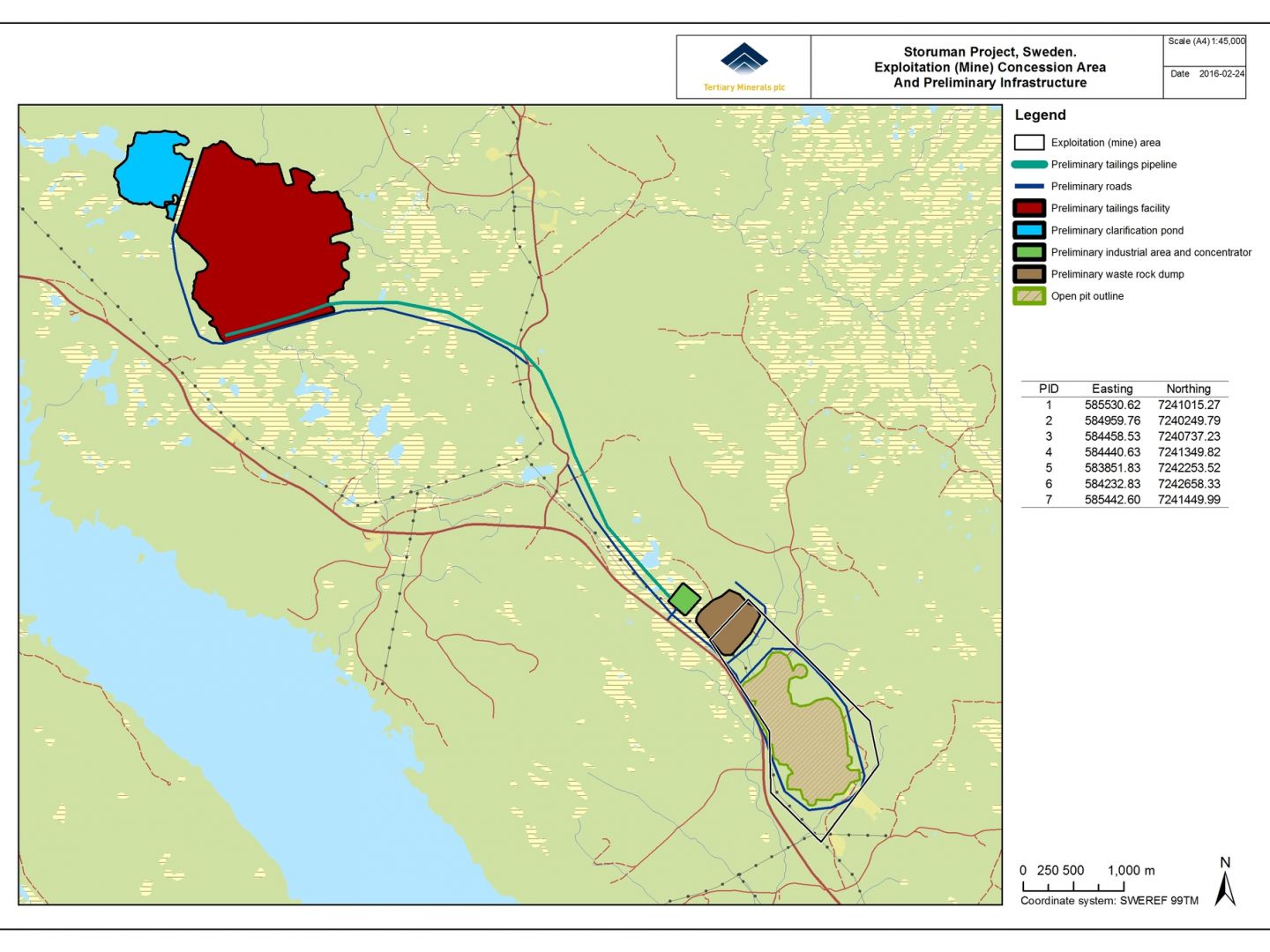 Mine Concession and Preliminary Infrastructure 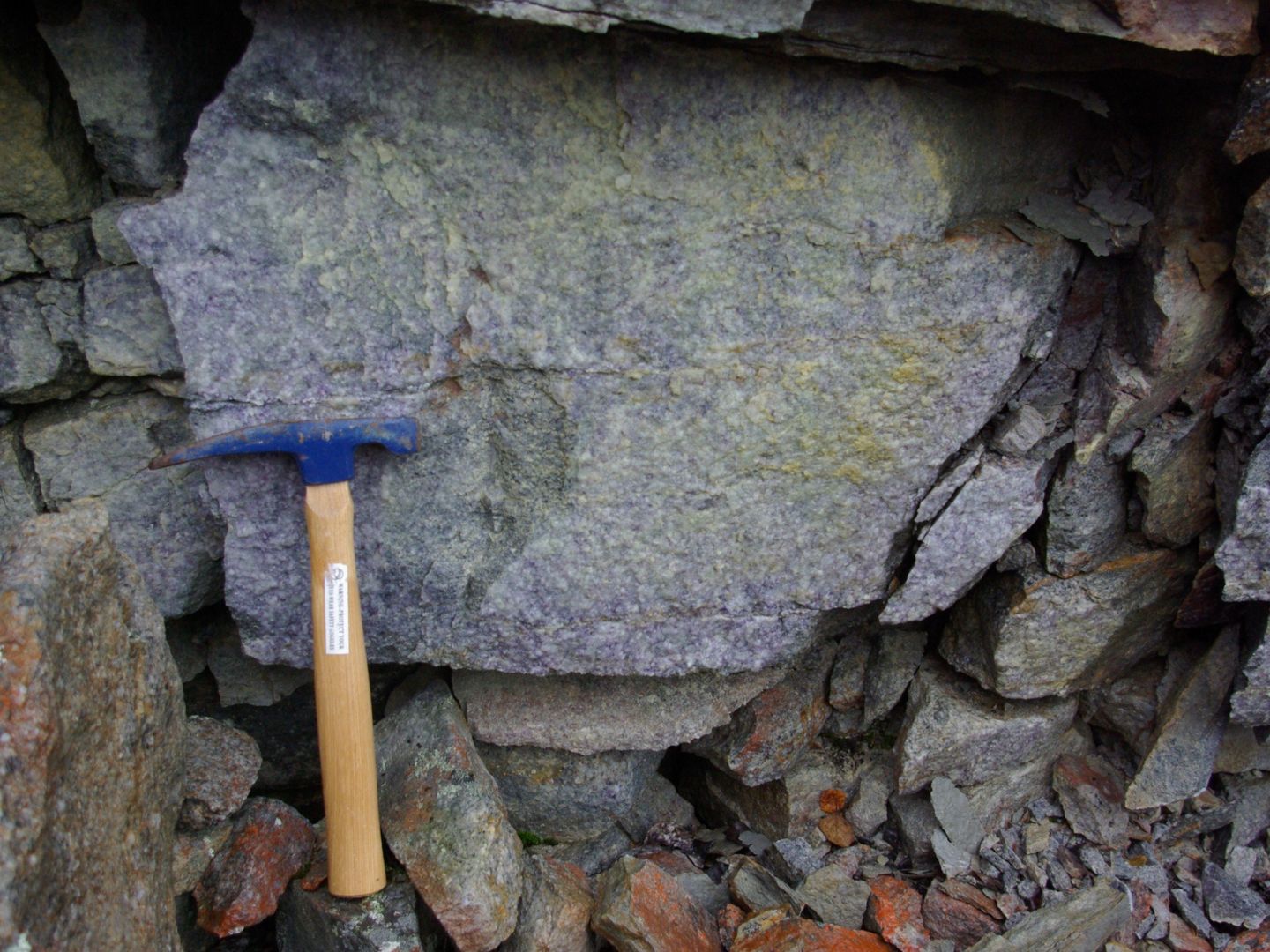 Mineralisation in Close up 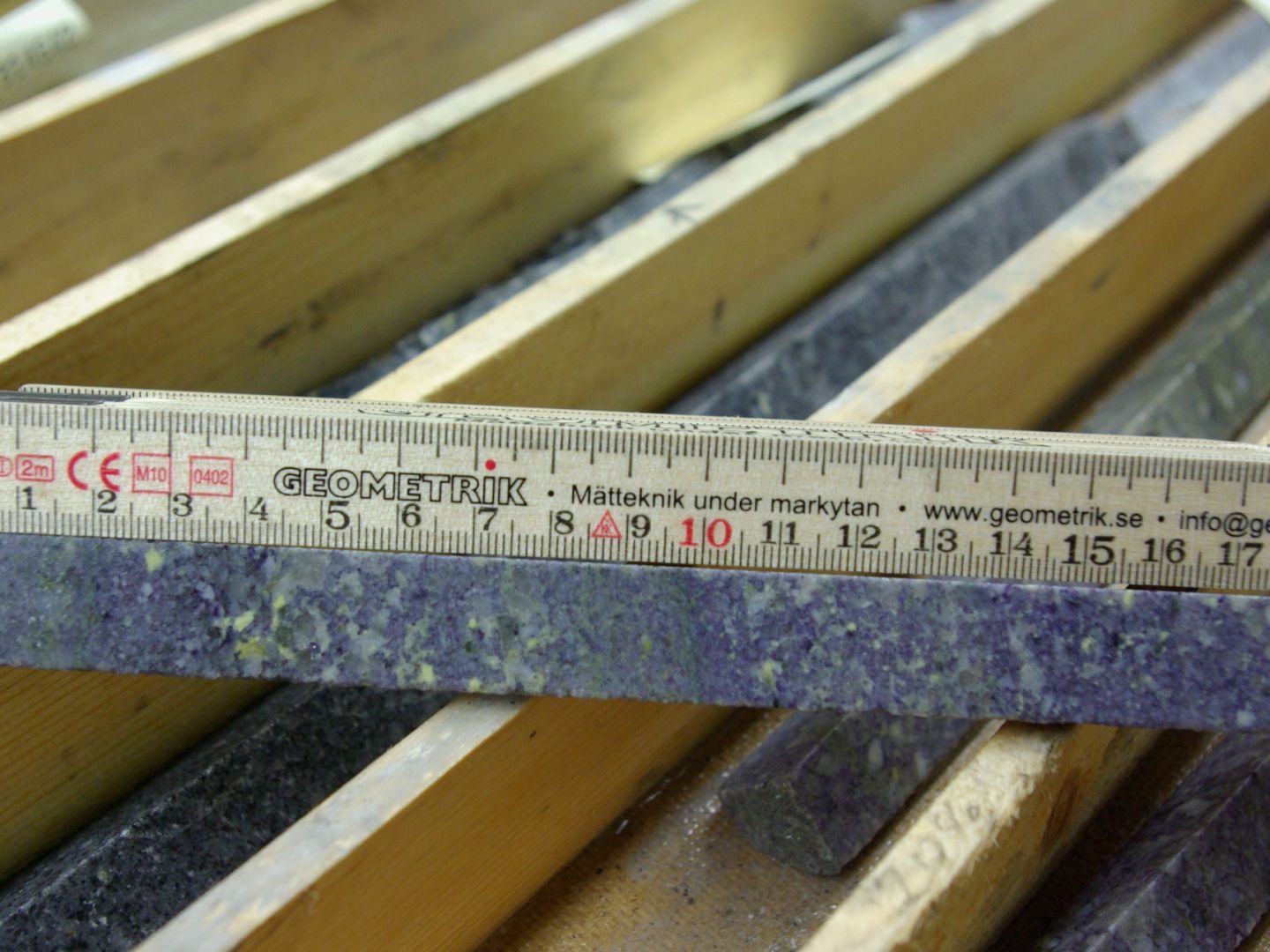 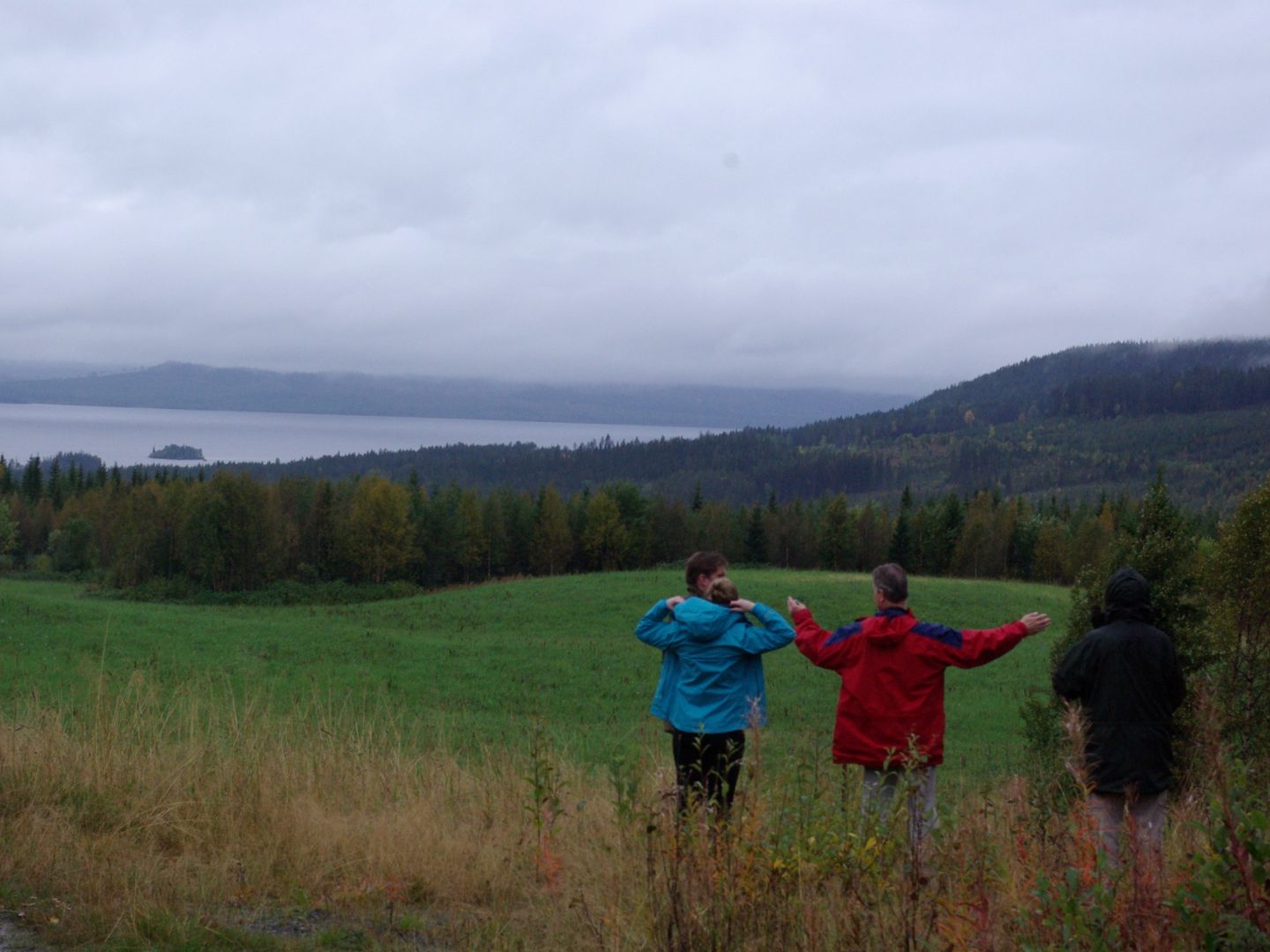 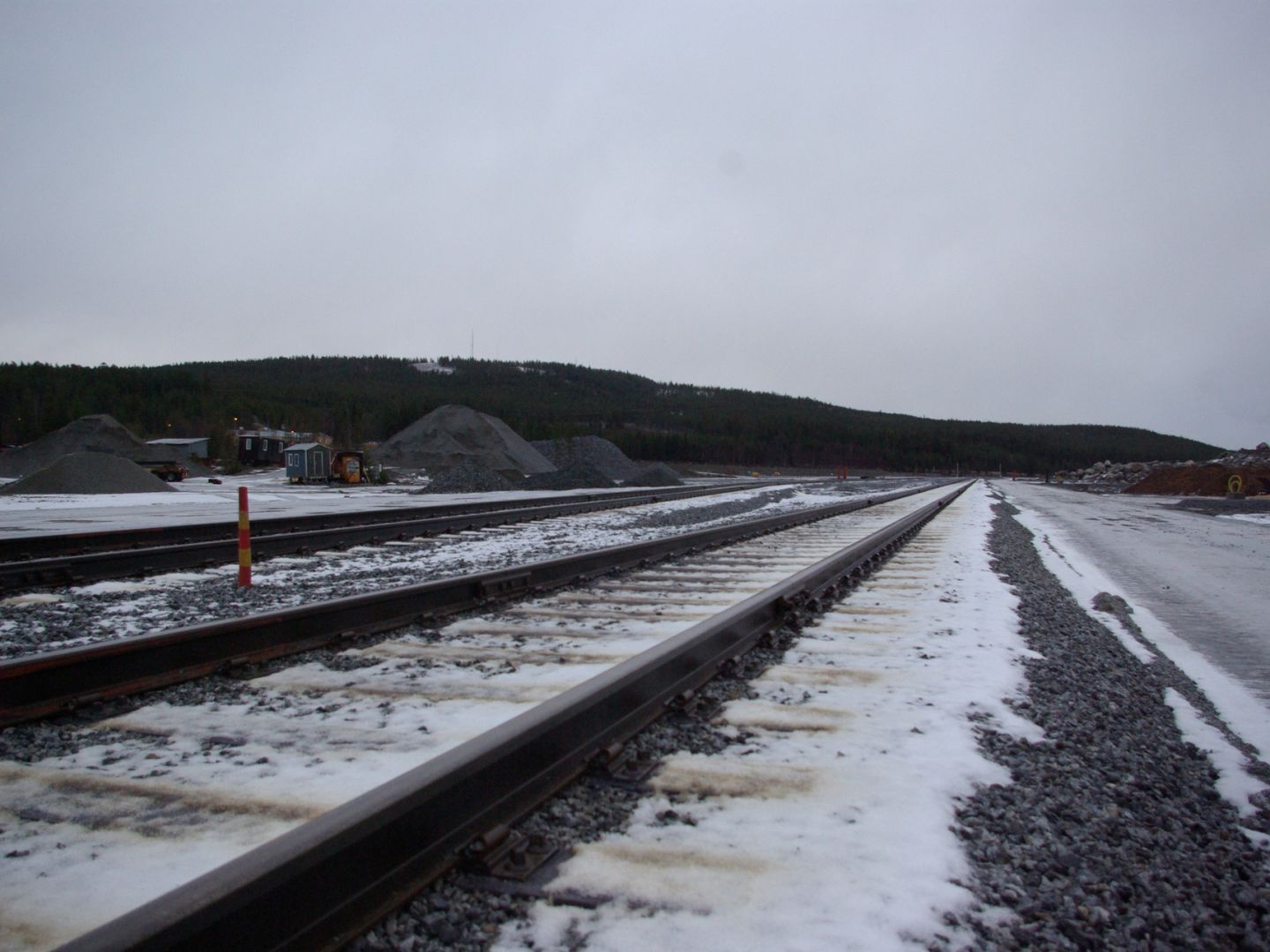 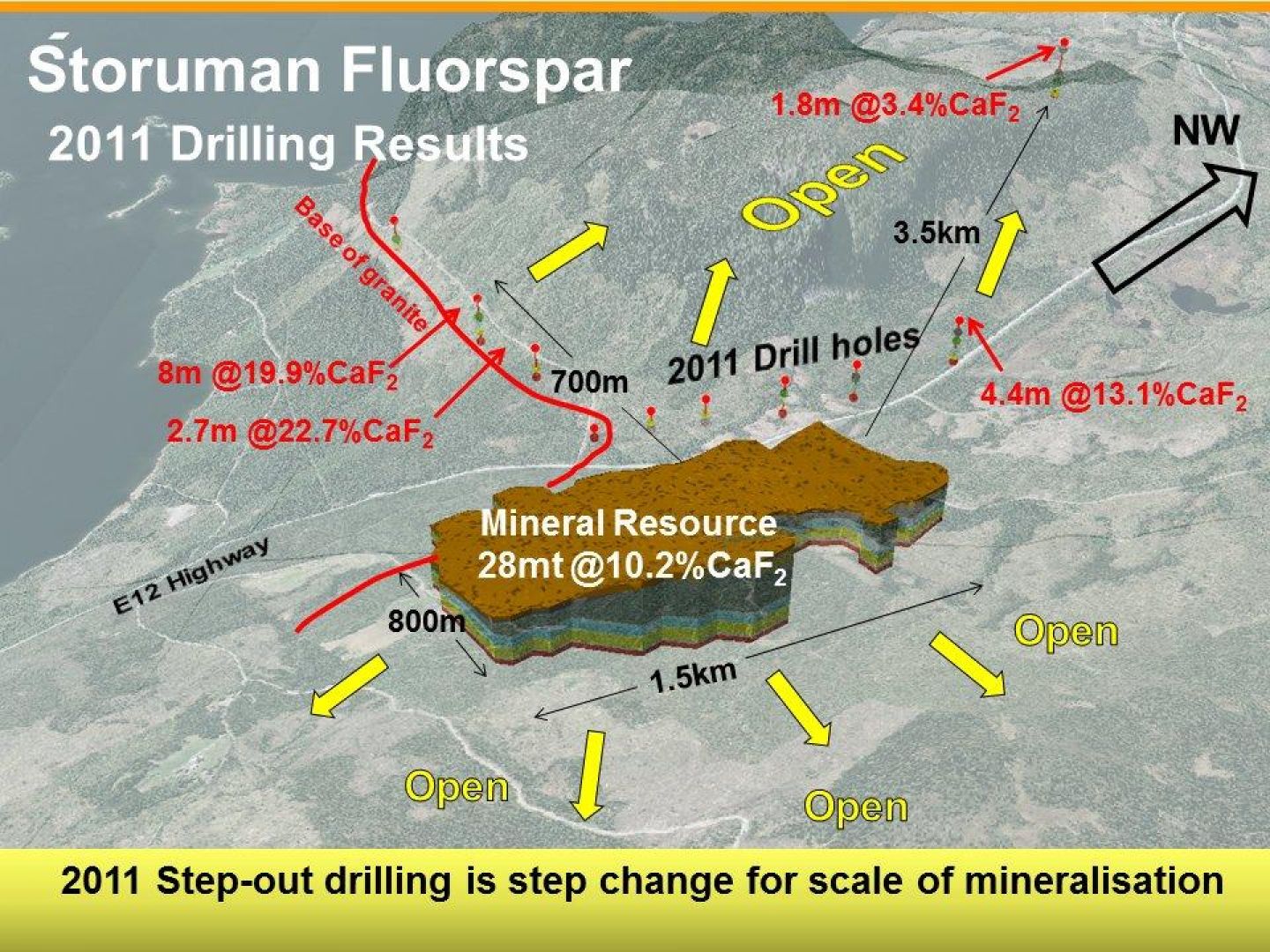 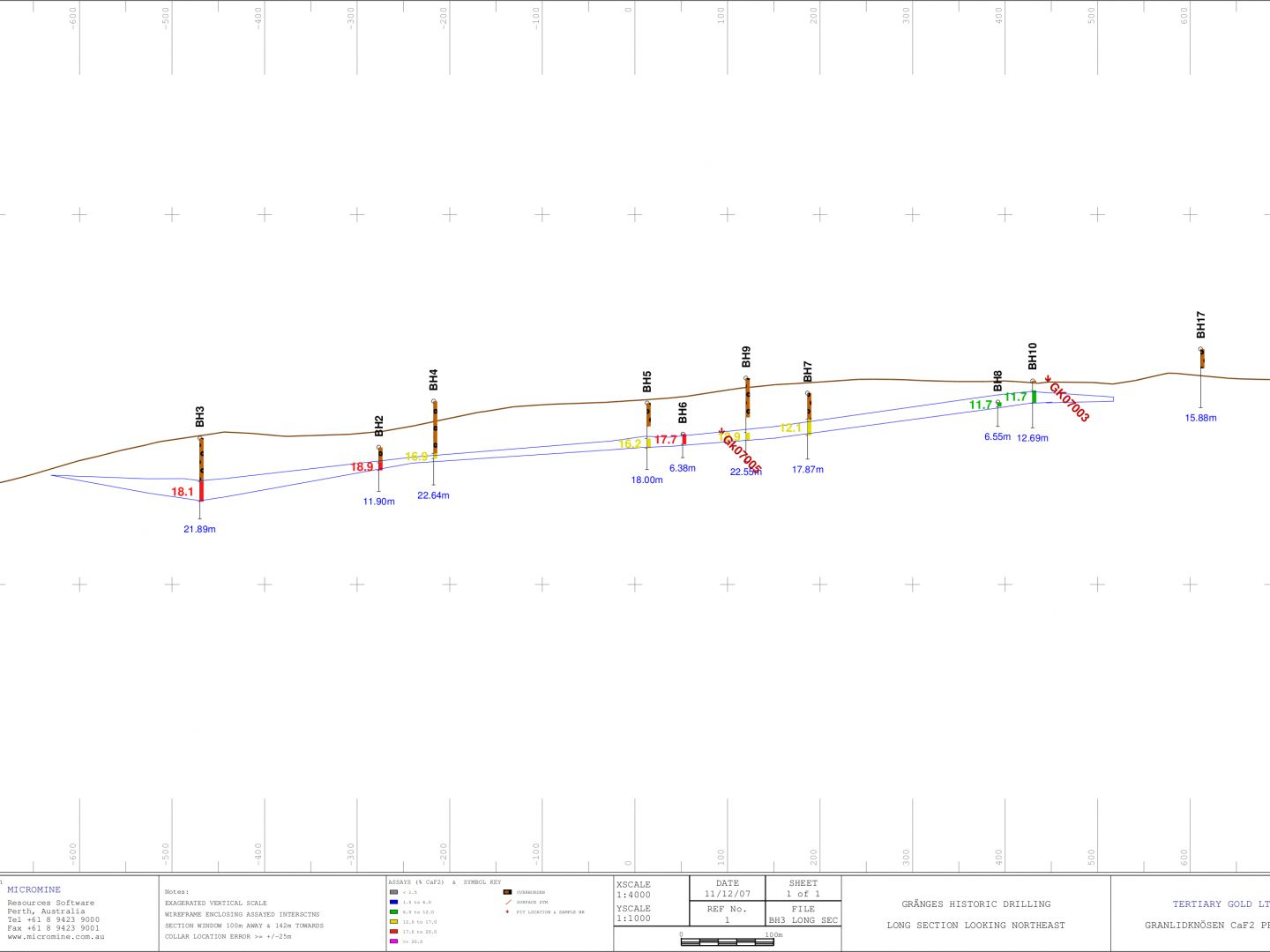 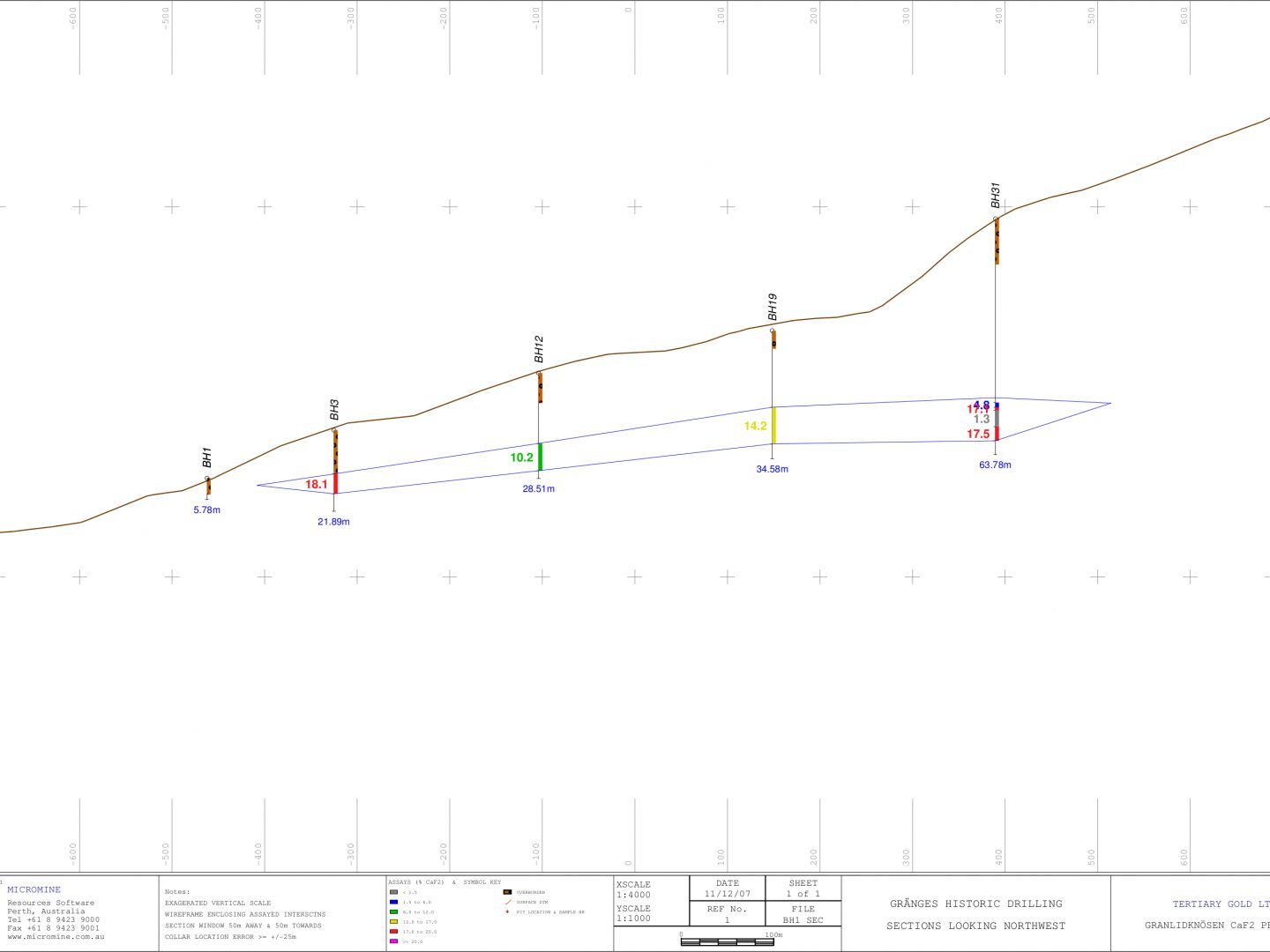