In addition to the Jacks Project, Tertiary has entered into agreements to acquire up to a 90% joint venture interest in four additional Large Exploration Licences held by Mwashia Resources Ltd, our local partner.

Exploration Licence 27066-HQ-LEL covers 55.4 sq. km. and is located 125km west of Solwezi in the Central African Copperbelt in the in the Domes region of the Copperbelt and covers Lower Roan Subgroup rocks on the flank of the highly prospective Kabombo Dome.

The licence is surrounded on three sides by First Quantum Minerals’ (“FQM”) Trident Project licences which includes the Enterprise nickel deposit, which is currently in development, and the large currently producing Sentinel (Kalumbila) copper mine, located 8km south and 18km southeast of the licence, respectively.

FQM has invested US$2.1 billion of investment in the Sentinel copper mine where the plant has the capacity to treat 55 million tonnes of ore to produce 300,000 tonnes of copper per annum.

Enterprise is a sediment-hosted nickel-sulphide deposit with a total measured and indicated resource of 40 million tonnes of ore containing 431,000 tonnes of nickel and production of up to 4 million tonnes per year of nickel ore will be processed.

Tertiary is reviewing available historic data and plans further exploration in the near future.

The licence covers basement rocks outside of the traditional Copper Belt and the region is a focus of exploration for copper-gold in so called Iron-Oxide-Copper-Gold (“IOCG”) deposits best exemplified by the giant Olympic Dam copper-gold-uranium deposit in South Australia.

The past-producing Kalengwa copper mine is situated approximately 20km west of the licence and is believed to be one of the highest-grade copper deposits ever to be mined in Zambia. In the 1970s high grade ore in excess of 26% copper, making up approximately 20% of the ore body, was trucked for direct smelting at Copper Belt mines.

Exploration Licence 27065-HQ-LEL covers 334.8 sq. km. and is located 90km west of Luanshya in the Central African Copperbelt. The licence is partially underlain by the prospective Lower Roan arenite and lies approximately 70km southeast of the currently producing Chambishi Southeast copper-cobalt mine.

Exploration Licence 27067-HQ-LEL covers 71.9 sq. km. and is located 18km northwest of Chingola in the Central African Copperbelt. The licence lies immediately west of the Konkola and Musoshi copper deposits which are under active exploitation at the Konkola and Lubambe mining complexes.

Prospective Lower Roan Subgroup rocks are mapped as deeply buried in the licence area but key fault structures such as the Luansobe Fault extension, Cross Axis Fault Zone, may cross into Konkola West.  These fault structures are often associated with copper mineralisation in the area and may have uplifted blocks of prospective Lower Roan lithologies to a shallower, more accessible depth. 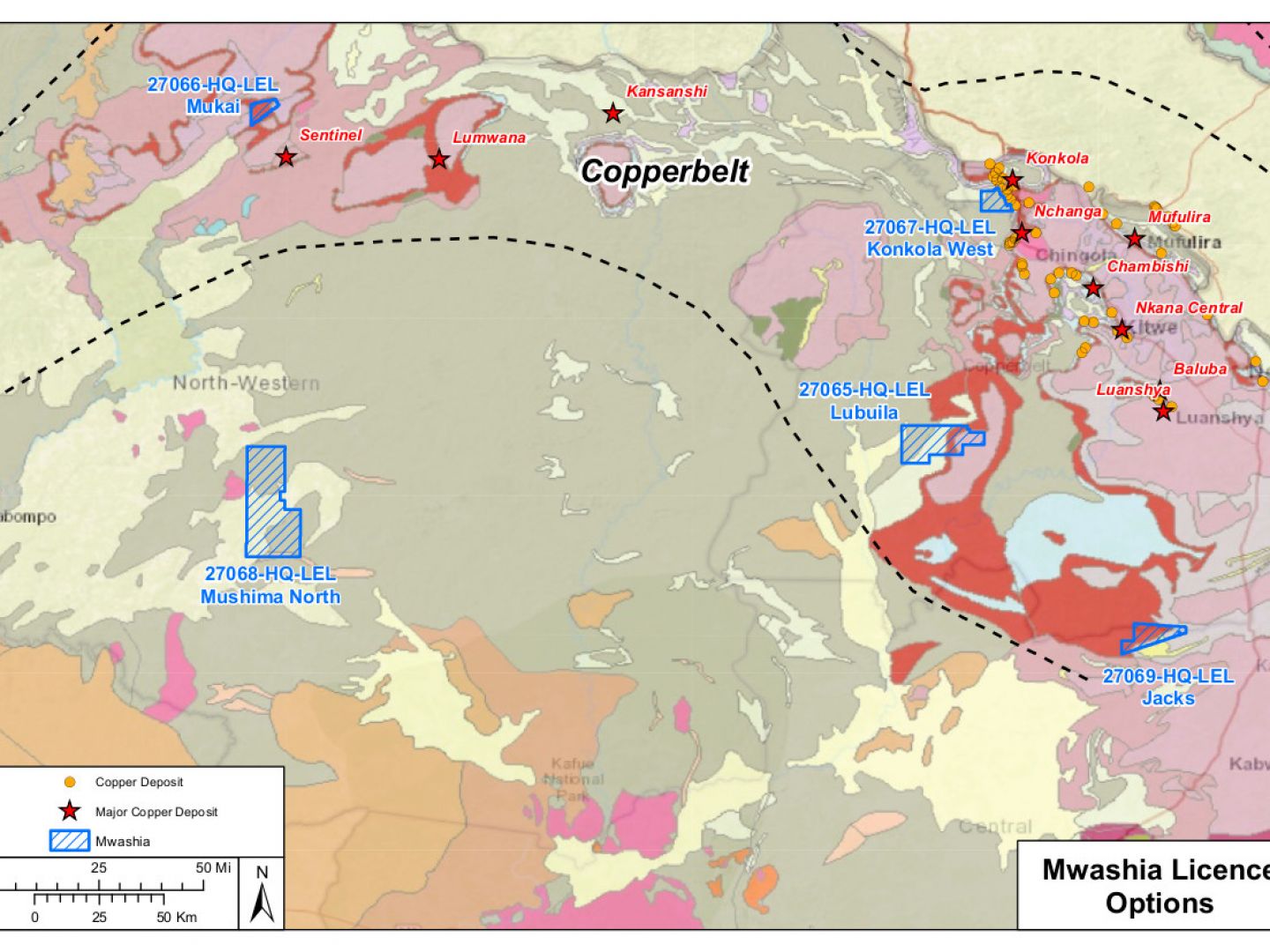